Brand new townhome for sale. Upgraded cabinets, hardwood laminate flooring, quartz counter top in kitchen and all bathrooms and so much more. This charming interior unit ...

Vacant lot, not too far out in Awendaw. Just far enough away from Mt Pleasant to feel like you are in the country but still only 15 minutes to Costco. City water avail...

Look no further to your next home in the wonderful subdivision of Snee Farm. This turn-key garden home is ready for it's next owner. This home boasts lots of natural ligh...

LOCATION, LOCATION LOCATION. This 3-bedroom condo is conveniently located in the heart of Mt Pleasant close to shopping and the Isle of Palms beach. This home has man...

Beautiful renovated single family home in the desirable Mount Pleasant, walking distance to Shem Creek! This home has been completed renovated, including the addition of ...

Welcome Home !! This expansive custom built colonial on the 13th fairway in Dunes West is situated on over an acre in the coveted subsection of Brickfall Estates. The la...

Enjoy lowcountry living at its finest within the serene and peaceful setting of Paradise Island. This stunning elevated home offers incredible long-range marsh views and...

This is your opportunity to build a truly custom home in the heart of Old Mt. Pleasant. This property sits in the new subdivision of Edwards Place, which was the childhoo...

Rare Opportunity to purchace an Exculsive Private Estate in the prestigious Wando Farms. Property in this neighboorhood does not turn over often. With only 14 owners, eac...

Located in the highly desirable Belle Hall subdivision, this 4 bedroom 2.5 bath home sits on a lovely pond, allowing your perfect oasis in the middle of town! 5 year roof...

This regal, two story home resting on a spacious lot is waiting for you! Entering the home, an open concept space laden with gorgeous hardwoods, illuminated by an abundan...

Centrally situated in Mount Pleasant, this charming home offers a functional floor plan, a private backyard, and a prime location within walking distance of popular local...

Fantastic custom home built in 2019 on wooded 3/4 acre lot! Lot backs up to Seewee Preserve and has wooded buffer on right for privacy. This open floor plan is great for ...

Search For All Mount Pleasant Homes, Condominiums and Land:

Mount Pleasant is a large suburban town in Charleston County, South Carolina, located directly across the Cooper River from the historic City of Charleston, and for several years it was one of the state's fastest-growing areas, doubling in population between 1990 and 2000. The population was slightly over 67,000 at the conclusion of the 2010 census.

After almost 250 years as "the sleepy town on the other side of the harbor," Mount Pleasant forged its 20th century identity when the Grace Bridge opened in 1929, connecting it to Charleston and sparking a building boom that continues more than 80 years later. The Silas Pearman Bridge, built adjacent to the Grace Bridge, opened in 1966.

Yet by the dawn of the 21st century, snarling traffic on those Cooper River bridges was choking the area's prized quality of life. Things improved dramatically with the opening of the $650 million Arthur Ravenel Jr. Bridge, an eight lane marvel that was greeted with fireworks and celebration on July 16, 2005.

At the foot of the bridge is Patriot's Point, a naval and maritime museum, which is also home to the World War II aircraft carrier USS Yorktown which is now a museum. The Ravenel Bridge, an eight-lane highway that was completed in 2005, is an iconic structure that allows quick commutes between Charleston, North Charleston and Mount Pleasant.

The enlarged bridge marked the beginning of a new era for the state's fifth-largest municipality, now home to over 70,000 people.

Despite its reputation as the suburban gateway to Charleston and the East Cooper beaches, the historic heart of Mount Pleasant can still be found near picturesque Shem Creek, where the local fishing fleet dock beside popular locally owned eateries such as Reds Ice House, The Tavern and Table and others. The Old Village founded in 1680 and incorporated in 1837, sits on breezy bluffs that overlook the harbor just seaward of Shem Creek.

The Old Village has quaint 18th century homes, the Pitt Street commercial district and the neighborhood's authentic shade-drenched ambiance. Residents and visitors alike enjoy trips to Alhambra Hall Park and the nearby Pitt Street Bridge, which once connected the town to Sullivan's Island but now offers views of Charleston Harbor and easy access to fishing and crabbing.

Other glimpses of Mount Pleasant's past can be found across town on scenic Long Point Road. On one side of the road, motorists may turn off and wander down a broad alley of oaks that leads to Boone Hall Plantation. Settled in 1743, this privately owned historic property has been open to the public for tours since 1955 yet remains a working plantation. Its "you-pick 'em" fields and seasonal events are beloved by local families.

On the other side of Long Point Road, the Charles Pickney National Historic Site interprets life at Snee Farm Plantation, home of one of the original signers of the U.S. Constitution. The U.S. PArk Service staff makes a special effort to explain and preserve the region's Gullah culture.

Glimpses of that Gullah heritage can be seen along U.S. 17, where the area's "basket ladies" still make and sell the Lowcountry's signature sweetgrass baskets from simple roadside stands.

The qualities the town guards today helped convince Money magazine to name Mount Peasant as one of the Top 100 Best Places to Live in 2006 and 2010. Money magazine lists the average home value at around $287,000 and mdian household income at more than $95,000.

Caring for others is also on the rise. East Cooper Community Outreach, a volunteer organization that emerged in the aftermath of Hurricane Hugo in 1989, operates social programs aimed at helping disadvantaged people live healthier, more successful lives. A weekly farmers market on Tuesday afternoons from April to October gives access to affordable, healthy food.

Fitness has also been on the upswing in Mount Pleasant since the new Ravenel bridge opened in 2005 with a lane for pedestrians and bicyclists. Residents make extensive use of the town's numerous parks, ballfields and gyms, and recreational sports leagues are numerous.

Mount Pleasant's neighborhoods have varying styles and offer residents a range of choices.

The Tides, an upscale condominium complex on Charleston Harbor, is among the towns newest. I'On, a new-urbanist development off Mathis Ferry Road, is an award-winning neighborhood of beautiful homes, elaborate public spaces and mixed-use units. Farter out, the sprawling new developments of Park West and Carolina Park are moving the geographic center of the town further east.

With people come businesses, most of them oriented on either U.S. 17 or Coleman Boulevard. The town's most prominent shopping area is Towne Centre, between the Isle of Palms Connector and the end of Interstate 526.

In keeping with tradition, the town loves a good festival. Mount Pleasant hosts festivals for oysters, the arts, local foodies, the Scottish games and children. Every April the town turns out for the annual Blessing of the Fleet at Memorial Waterfront Park. The Christmas Parade is a big draw, as is the Cooper River Bridge Run, which attracts runners and walkers by the tens of thousands each spring.

The real estate for sale in Mount Pleasant offers numerous different options when it comes to considering the cost and style. Whether looking for a condo, townhouse, or residential house, there is bound to be something that fits the needs and desires of anyone who is looking. There has been significant development of housing in Mount Pleasant over the last ten to fifteen years. Whether it's a more mature neighborhood or a master planned development with executive style homes, there is something for everyone. Houses provide amenities such as 2-car garages, private decks and other luxury finishes throughout them. Most of the condos and townhouses for sale also come with many intriguing features just as the houses do, such as walk-in closets, fireplaces, patios, hardwood flooring, full size washer and dryer, and not to mention offer gorgeous views as well. All located relatively close to downtown and the waterfront areas, Mount Pleasant homes and condos have something to offer everyone in one way or another and are all reasonably priced. 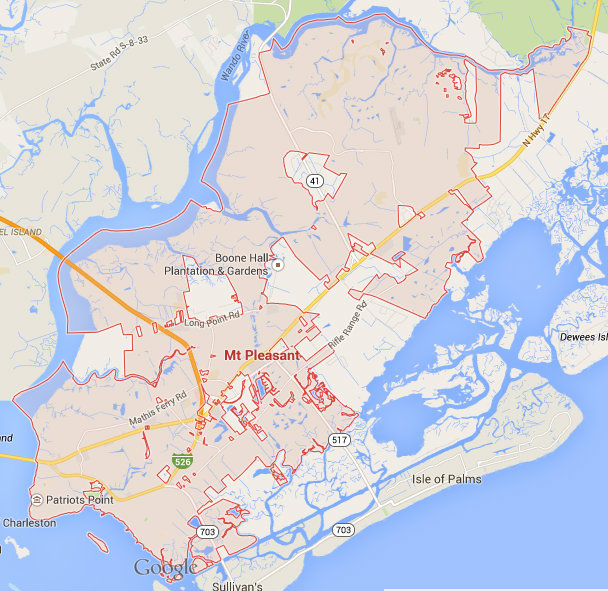