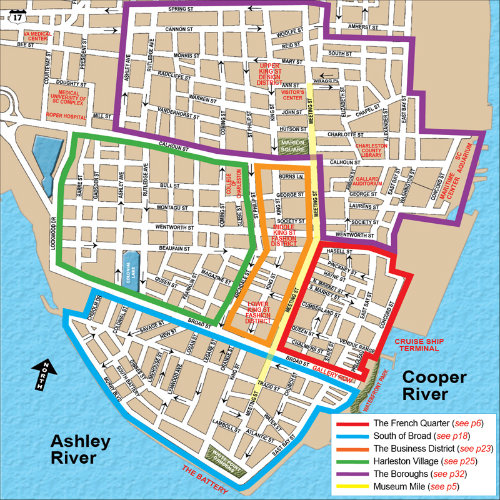 With all of the grace and charm of a Southern city, Charleston draws in visitors and residents with its historic charisma and waterfront panoramas. Stroll down King Street to browse boutiques, wander through art galleries in the French Quarter, or tour some of the city's historic homes. The peninsula is home to a rich history that is revealed in nearly all of its building, streets and parks.

The city, originally named Charles Towne was founded in 1670 in current day West Ashley and started with about 30 houses. It moved to the peninsula 20 years later and grew to encompass several thousand inhabitants as it became  a major trading center.

After weathering several hurricanes, and French and Spanish attacks during the 1700's, Charleston became a royal colony in 1921.

Charleston began to take shape as a major city, adding cultural, residential and commercial aspects. Businesses popped up, such as the country's first fire insurance company and one of the country's first theaters. Several historic landmarks were built, including the East Bay Warehouse district, which is now Rainbow Row, and lots laid out in 1745 for the first neighborhood, Ansonborough.

The first church services at St. Michaels Episcopal Church on Broad Street were held in 1761. It is now the oldest church building in the city. The Charleston Museum was established in 1773 as the first museum in what would become the United States.

Several major Revolutionary battles unfolded around Charleston, and the city eventually fell under British control for two years before it was incorporated in 1783.

The College of Charleston was granted a charter in 1785 and the school has a large physical presence in downtown Charleston to this day.

In 1824, the Medical University of South Carolina was founded, becoming the first medical school in the South. The MUSC campus and hospital occupy a large area on the peninsula's west side between Calhoun and Bee streets, where a cluster of other health care providers have hospitals such as Roper St. Francis and the VA Medical Center.

The South Carolina legislature established a municipal guard in 1822 to protect the city of Charleston and the surrounding area. The newly formed military force was given land both for the storage of weapons and for a guard house. In 1829, a building called the Citadel was built in Charleston's Marion Square. A similar building called the Arsenal sprang up to the north in the state capital of Columbia in 1833.

But it wasn't until the governor of South Carolina decided that the troop's guard duties should be combined with education that The Citadel began to take shape. State lawmakers established the South Carolina Military Academy in 1842. Troops in both the Citadel and the Arsenal were replaced by students, who were then and now called the South Carolina Corps of Cadets. The military training program resembled that of another U.S. military academy you've probably heard of: West Point. Initially, the Arsenal and the Citadel operated independently, but later were combined for economic reasons.

Citadel cadets have fought in every U.S. war starting with the Mexican War of 1846, which established the fledgling academy's reputation for military instruction. During the Civil War, the Corps of Cadets became part of the state troops and fought in several battles defending Charleston. In 1865, Union troops burned down the Arsenal, and they also set up camp in the Citadel, forcing it to close temporarily.

In 1842 the Citadel reopened and re-established its military education program. In 1910, the name was changed from the South Carolina Military Academy to The Citadel, the Military College of South Carolina. In 1922, the growing college moved to its current campus along the Ashley River.

­The Citadel is a public, state-supported, senior military college. Its undergraduate student body numbers more than 2,000. The school offers bachelor's degrees in sciences, mathematics, English, modern languages, computer science, engineering and many other fields of study.

All cadets enroll in Reserved Officers' Training Corps (ROTC) instruction in the. military branch of their choice, such as the Marines. Unlike West Point or other federal services academies at which the U.S. government pays for students' tuition in exchange for military service, Citadel cadets aren't required to join the military upon graduation. But about 30 percent of Citadel grads do choose to receive an officer's commission and join the military each year. Since 2001, more than 1,300 Citadel alumni have served. A small number of cadets in the National Guard and Reserves have been called to serve while enrolled in college, but that doesn't happen often, except say, in 1944, when the entire class of 1944 was called to fight in World War II.

Despite a major earthquake in 1886 and Hurricane Hugo in 1989, Charleston still has some of the most historic homes and buildings in the South. A designated "historic district" preserves many residential properties.

Nestled South of Broad on the corner of Gibbes Street and Rutledge Boulevard, this 1910's home offers modern convenience with historic charm and character. The home's dow...

There are very few places in the United States where someone can lay claim to living in the home of a ''Founding Father.'' Edward Rutledge, signer to the Declaration of I...

Circa 1837. The Winborn Lawton House. Surrounded by history, this exquisitely finished South of Broad property was recently restored, offering 4 spacious bedrooms and 4 1...

This one-bedroom South of Broad condominium truly lives large. The spacious living room with built-ins is adjacent to a separate dining room, creating an open atmosphere ...

This lovely ''Colonial Revival'' home was originally built in 1889 by Captain Frederick Heinz and used as an ice cream ''saloon'' until 1895 until the property was turned...

Here is your diamond in the rough. This house has real potential to become your charming, cozy cottage. Come see for yourself: potential off-street parking; the deep b...

If these walls could talk. This pristine c 1756 Charleston Single stands tall and proud on the corners of Meeting and Lamboll Streets. ***The kitchen has just been update...

Circa 1732. Beautiful Georgian house with garage located in a great high ground location just off Meeting Street. The Fotheringham-McNeil Tenements are listed as valuable...

23 Meeting Street, in the heart of historic Charleston, has been part of the city's history since 1694 and the house since the 1740's. Today the home offers every modern ...

On the top two floors of an Antebellum Mansion is this 3 bedroom condo downtown with gorgeous wood and brick detailing throughout. Ideally located between King and Meetin...

Recently renovated with a two-car garage and Charleston harbor views, 78 East Bay is situated on the prominent corner of Vanderhorst Wharf and right behind the pleasant c...

Welcome to historic 89 Broad Street in Charleston, SC! Erected in the late 1700s this Federal style building is situated just steps from the Four Corners of Law, Charles...