Get instant property alerts for www.homesandcondoscharleston.com

Get the MoveTo App 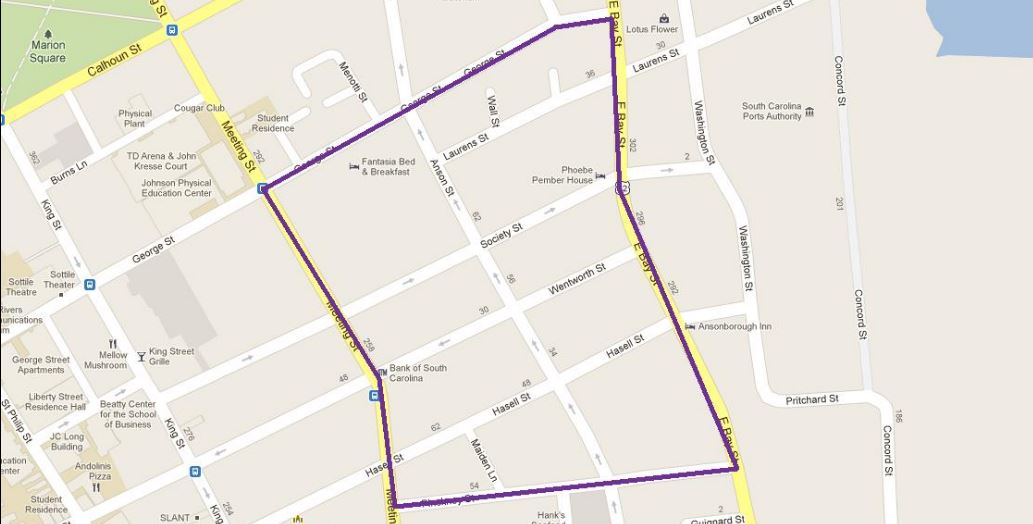 Above the French Quarter is Ansonborough, the peninsula's first neighborhood, although much of it was destroyed by a fire in 1838 and had to be rebuilt. Many of the houses have Greek-Revival characteristics and were built by some of Charleston's oldest family names, such as Joseph Legare and Edward McCrady.

History: The Ansonborough neighborhood of downtown Charleston, was named after Lord Anson of England. He had won the won the property in a poker game with Thomas Gadsden, a famous Charlestonian. The British had assigned Lord Anson was to Charleston in 1724 to protect the coast of South Carolina from pirates.  An Admiral, Lord Anson was an exceptional sailor, as he was the third Englishman to circumnavigate the globe. On his many voyages he captured Spanish ships filled with treasures. The Ansonborough district stretches from King Street to the edge of the Cooper River, between Hasell and Calhoun streets.  These farmlands were divided into a borough of 25 lots in 1746.

Today: As Charleston is a great walking city, the Ansonborough District is very convenient to many of the interesting area of Downtown Charleston. There are many restaurants and shops close by, and this borough is within a few blocks of the Charleston Harbor and Market St. The recently renovated Gaillard Auditorium borders the northern side. Many of the homes in Ansonborough are made of brick, built after a fire ravaged the original homes in 1838, with prices ranging from $550,000 to $2,500,000. There is also a good selection of condos on the Harbor, starting at $350,000 at Dockside, Laurens Place and Anson House.

A tiny corner in Ansonborough has recently received an outsized amount of attention due to a dramatic makeover. Theodora Park at the corner of George and Anson Streets was recently opened after a $540,000 renovation.

The upgrade turns what was once a dusty, little-used playground across from the back-side of the Gaillard Auditorium into an inviting, well-appointed pocket park befitting its location across from the new Gaillard Center performance hall. The park includes a Philip Simmons created iron gate and handmade fountain tiles from Maine ceramics artist Paul Heroux, who said he spent a year working on the project. The 370 tiles, which were individually designed, glazed, and painted by hand, will line the fountain that runs the length of the central seating area of the park. Heroux said he took inspiration for the shape of the overall fountain from boxwood hedges and abstracted lines seen in cracked ice formations for the geometric shapes that dominate the tiles.

An excerpt from the book Charleston Style, by Susan Sully (Link: https://www.amazon.com/Charleston-Style-Then-Susan-Sully/dp/0789308312/ref=asap_bc?ie=UTF8), with permission by Susan Sully:

Behind the discreet facade of this contemporary residence in Charleston's historic Ansonborough neighborhood, Eastern and Western influence conduct a delightful pas de deux both indoors and out. Upon entering through the gate, visitors find themselves within an astonishingly compressed Italian garden whose towering cypress trees grow higher than the width of the plot. The four green giants frame a narrow central axis to create an optical illusion of length that would have delighted Italian Renaissance garden tricksters. At the end of the axis, an abstract nude by contemporary sculpture from Maine invites comparison to ancient statuary. Boxwood hedges trained in perfect semicircles flank the allee, behind which a wall of time-worn stucco completes the illusion of European antiquity.

A small gate in a corner of the garden leads visitors into another timeless place. Beneath a canopy of leafy trees, a perfect Japanese garden unfolds with gently undulating contours. A small arched bridge connects a path around the perimeter of the walled garden within which winds a frozen stream of stones. Designed in Kyoto, the garden contains elements of traditional Japanese gardens to create a microcosm of spirit and matter. Framed by indigenous trees, the garden combines both local and imported plant material and Japanese artifacts to create a lushly exotic retreat.

The house itself is designed to take full advantage of the garden setting. Large picture windows in ground-floor rooms and balconies above frame views of both the Italian and Japanese gardens. The furnishings within these rooms reflect the gardens dual influences. A low Chinese table and silk cushions form a sitting area in front of the window opening onto the Japanese garden. An antique Chinese robe hangs above a simple English sideboard flanked with Chinese vases. A painted banner found by the resident's grandfather at the Imperial Palace in Beijing ornaments the opposite wall.

The large room's minimal geometry invites the placement of a series of seating arrangements laid out with eclectic flair. On either side of the oversized marble mantel stand two couches adorned by pillows covered with Indian mirrored textiles. Two antique Chinese parrots stand on the mantel beneath a large figurative painting by Boston artist Jennie Summerall, whose field of bright color and pattern complement the Asian textiles in the room. Khilim rugs cover the floor, and a large Noguchi lamp glows organically from the corner of the room.