Sophisticated townhouse on Elliott Street that is located near the Battery, Waterfront Park and many of the great restaurants, boutiques, art galleries and so much more. ...

Located in the heart of downtown Charleston, this nicely updated cottage is move-in ready. This stunning one-story home is on a nice size lot touching the historical Char...

Historic South-of-Broad home with charm to spare! Steps from the Battery, Colonial Lake & the City Marina. Open living space downstairs with a half bath, plus three bedr...

Search All Real Estate on the Charleston Peninsula:

"Charleston's climate, the southern habits, the social arrangements, all give a picturesqueness in their separate ways, and there is a fine air of age, and dusty decay which invests whole streets with the venerableness of the past. - It is like Italy in the feeling that belongs to it, - and ought to have painters and poets." ~ Charles Eliot Norton, 1855

Charleston, South Carolina is a historic port city located approximately halfway between Hilton Island to the Southwest and Myrtle Beach to the Northeast. There are roughly 600,000 people in the Charleston metropolitan area. Charleston itself is a peninsula city that sits between the Cooper River and the Ashley River, forming an estuary that is known as Charleston Harbor.  There are a number of islands and barrier islands in the Charleston area. The city is also know for its fine beaches and outstanding restaurants. Foodies love Charleston. The city has also been rated a top vacation destination by Conde Nast Traveler and Forbes magazine has ranked Charleston as one of the top retirement locations in the country.

Charleston is a major tourist destination, with a considerable number of luxury hotels, hotel chains, inns, and bed and breakfasts. The city is well known for its streets lined with grand live oaks draped with Spanish moss. Along the waterfront in an area known as Rainbow Row are many beautiful and historic pastel-colored homes. The city is also an important port, boasting the second largest container seaport on the East Coast and the fourth largest container seaport in North America. Charleston is becoming a prime location for information technology jobs and corporations, most notably Blackbaud, Modulant, CSS and Benefitfocus. The city has garnered the nickname of Silicon Harbor for the fast growth that has been seen within the tech sector. Charleston is also now home to the assembly site for the 787 Dreamliner for the Boeing Corporation. The only Boeing facility like this outside of the Seattle area.

Charleston is also an important art destination, named a top 25 arts destination and is the host city for the Spoleto Festival each year.

Charleston is the primary medical center for the eastern portion of the state. The city has several major hospitals located in the downtown area alone: Medical University of South Carolina Medical Center (MUSC), Ralph H. Johnson VA Medical Center, and Roper Hospital. MUSC is the state's first school of medicine, the largest medical university in the state, and the sixth oldest continually operating school of medicine in the United States. The downtown medical district is experiencing rapid growth of biotechnology and medical research industries coupled with substantial expansions of all the major hospitals.

Charleston continues to experience consistent growth and offers endless amounts of opportunities for anyone who is looking. There are townhouses, condos, and residential houses for sale that range from really low in price to rather expensive. Obviously there are many areas that are proximate to water, ranging from beach front homes to deep water docks, to tidal creeks and marshland to river lots. The houses for sale in the Charleston area range from historic downtown homes built in the 1700's and 1800's, to executive style homes in master planned communities such as Daniel Island, to beachfront homes of every style and everything in between.

New developments are opening up residential spaces, such as the Midtown project, expected to help revitalize upper King Street with condominiums and single-family houses mixed in with commercial space. The recently constructed Bee Street Lofts offer views of the Ashley Rivr. With their proximity to the Medical University of South Carolina, the lofts have been popular with physicians moving into the area. This injection of residential property has attracted several restaurants to the area.

If you have any questions, please do not hesitate to:

This map can provide a quick overview of the various areas of the Charleston Peninsula: 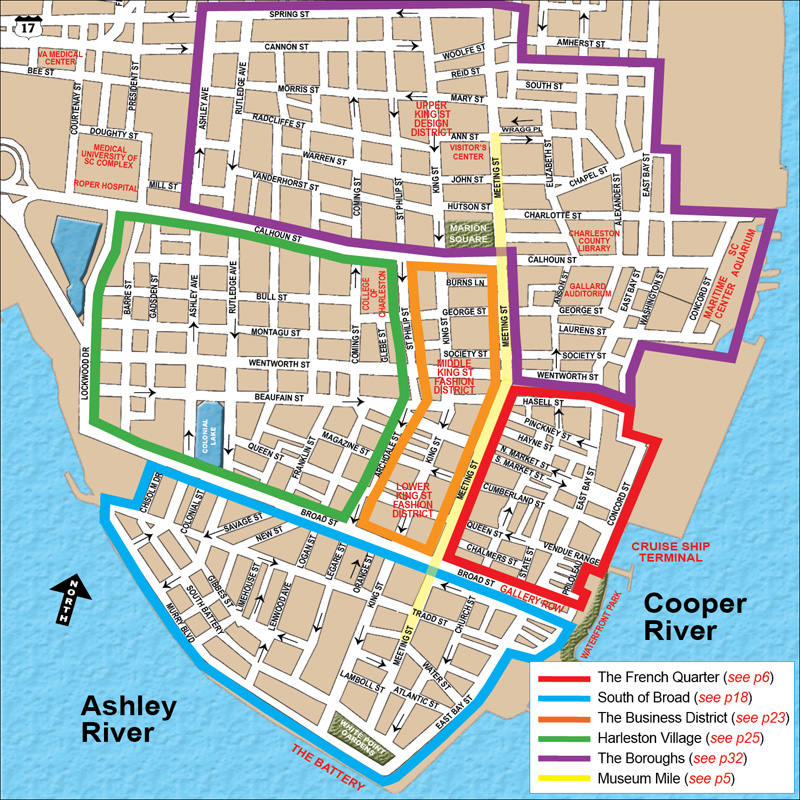